Cindy Whisman, a 59 year old grandmother was killed by her daughter's pit bull as she was babysitting her grandson at her home in Madison Township Ohio.  Cindy Whisman was dead at the scene, her two year old grandson was found uninjured in the yard when a neighbor rushed to help, beating the pit bull away with a walking stick.

Julie Whisman, daughter of Cindy Whisman and the owner of the pit bull, named Polo, stated that her son and another dog were in the yard  at the time of the attack.  Julie Whisman identified both her dogs as pit bulls. Other sources have identified the dog not involved in the fatal attack as a Lab or a Lab/German Shepherd mix.  Julie Whisman stated "As far as I know my neighbor told me she saw her and the dog outside,"  "She thought they were playing back and forth like this, then all of a sudden she saw her on the ground and kept saying Polo, Polo, because that was the dog's name, and she was rolling over, so she (the neighbor) called 911 and then she didn't see her no more."  The 911 call included this  “Hurry! My neighbor’s dog is biting her,” the woman tells the dispatcher in between cries for help. “It’s a pit bull, she’s all bloody.”

There was no history of violence from either of Julie Whisman's dogs.  Per WCPO, Whisman will have the option of going through a hearing process if she wants the dog back.  Whisman stated to a reporter that she does not want Polo back but she had this to say about Polo “He loved my son. He would never hurt my son. They played together– my son would sit on him, lay on him. Smack him in the face. He wouldn’t do anything,” 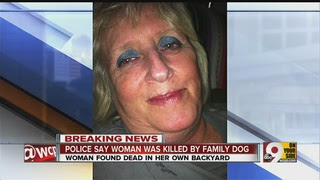 Since the passage of HB 14 in 2012 Ohio has had nine fatal dog attacks, four by pit bulls, one by dogs identified repeatedly by the victim in complaints to animal control as pit/mastiff mixes, and four by all other breeds combined.  Historical note - in the previous 25 years Ohio had six fatal pit bull attacks and six fatal attacks by all other breeds combined.  HB14, sold to foolish legislators as "finally giving dog wardens the tools to deal with dangerous dogs"  is an epic fail.  Here is another historical note, HB 14 was written by Ledy Vankavage's staff at Best Friends Animal Society headquartered in Kanab Utah, the deal was brokered by private citizen and pit bull advocate Jean Keating, and pushed through the Ohio Legislature by Keating's personal friend, Representative Barbara Sears assisted with a media blitz by the Toledo Blade.  All these facts come from documents obtained via public records requests.

Just a week or so ago Jean Keating was interviewed for a story by NBC24.com.  She stated on camera that Ohio law since the passage of HB 14 is "much more proactive, it identifies dogs that are dangerous before they hurt people."   Given the nine fatalities, not so much.  Watch the video, Tom Skeldon is also interviewed. He gives very honest information.  Per NBC24.com "Skeldon says the amended law was a mistake. "At the rate we're going, you're going to have a lot more deaths due to dogs. And, it doesn't have to be that way." Skeldon has the opportunity to say "I told you so."

8/5/2014 Update.  Julie Whisman is having second thoughts about Polo.  Per WHIO "Julie Whisman, Cindy’s daughter and the dog’s owner, said today she wants to see the results of that investigation and better understand what happened before making a determination about Polo’s fate. She said after thinking about the situation for 24 hours, she is “indecisive.”

There is a link to video of Polo at the shelter. The reported stated that Polo was aggressive to both dogs and the dog warden.

This is insane.  The dog is a killer.  The death has been ruled accidental.
Posted by scorched earth at 9:27 PM