This year-end wrap-up will not actually be a wrap-up, far too many attacks to deal with by
January 1st but we will get a start on this.

Legal issues surrounding Bosco the Biter, a pit bull that became the center of a conflict between the Lucas County Pit Crew, headed by Ohio's pit bull advocate, Jean Keating and the Fulton County Commissioners have been resolved. Background on the conflict can be found in this post.  For specifics on Bosco's adventures click here and here.

For those with no time to waste, Lucas County resident and pit bull advocate Jean Keating attempted to bully Fulton County officials about adoption procedures for pit bulls but the Fulton County Commissioners refused to play.  Keating's group later placed Bosco the Biter with a Fulton County family.  Bosco bit the new owner on the third day post placement.  The injured owner called the Pit Crew to pick up the dog but instead of following the law in Fulton County they attempted to hide Bosco from lawful quarantine.  Keating and two members of her group were amazed to face misdemeanor charges for obstruction for hiding Bosco from Fulton County officials and for violation of a rabies quarantine.

In October the Lucas County Pit Crew, headed by Keating, agreed to plead no contest to the charges. It was expected that the Pit Crew would pay a fine plus court costs in exchange for dropping the personal charges against Keating and her two associates.

Bosco the Biter, now a designated dangerous dog, has been removed from the state of Ohio and is now harbored by a couple living in Arizona.  Not surprisingly, the new owner, Jacque Johnson, is employed by Best Friends Animal Society and is an advocate for pit bulls.

Johnson has stated that "Bosco is the biggest clown in the entire world.  He's a great dog that some bad things have happened to."  She also admits that the dog "can be excitable, but has shown no aggression in his permanent home."  You will be thrilled to know that Johnson has set up a Facebook page for Bosco so you can follow his adventures in Arizona.

Let's stay in Toledo for a bit more pittery.  The Toledo Blade proudly announced that a "local group trains pit bulls for use by police."   The "local group" mentioned in the article headline is not very local.  The article refers to the New York state Animal Farm Foundation partnered with a dog training business in Texas.

The AFF spokeswoman, Stacey Coleman, stated "we train them to do the same work traditionally reserved for purebred dogs."   "The reason we do all of it is to change that negative stigma."  The translation for this is "we are creating breed ambassadors."

Much has been made of the ASPCA "public service" award won by Poughkeepsie's pit bull police dog, Kiah, an AFF subsidized dog.  Interestingly, no one has been able to name a public service performed by Kiah, other than being a pit bull subsidized by a very wealthy New York state resident. It appears that the ASPCA award is simply for sale. 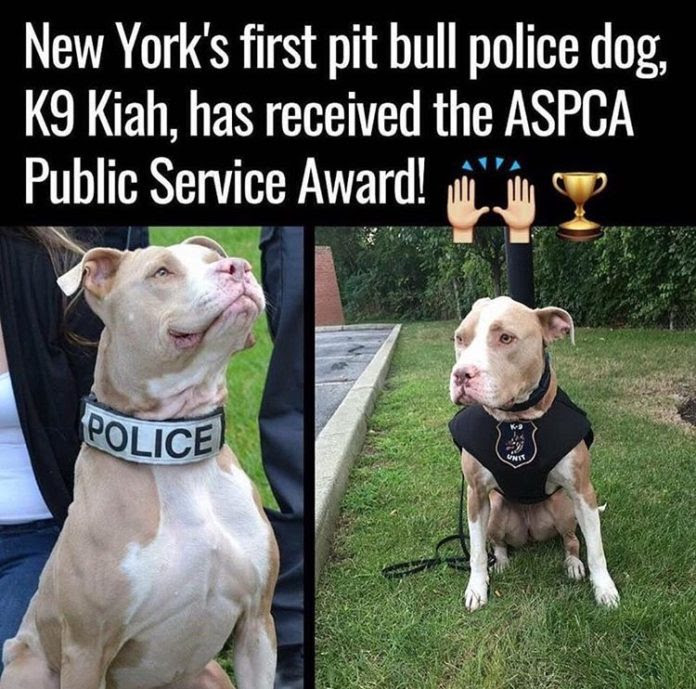 Texas training business Universal K9, partnered with the AFF picks up pit bulls from shelters and municipal pounds briefly trains them for narcotics and explosive detection and for tracking.  They are not trained for bite work which is required for apprehending suspects. The AFF pays the bills.

Apparently the editors of the Toledo Blade think Toledo needs a police pit bull but by the sound of it, Toledo police are underwhelmed. A spokesman for the Toledo police K9 unit stated that Toledo will not likely participate because the department  requires dogs trained for all aspects of police work.  Apprehension work with pit bulls is problematic. Pit bulls are frequently shot by police because they don't let go.  The police spokesman went on to say "I think the idea behind it is great but the start and end point for us is that we need dogs that can do everything."

The Toledo police get their dogs from Von der Haus Gill German Shepherds in Wapakoneta, Ohio and are pleased with the supplier who guarantees the health and suitability of their dogs.  Brad Croft of Universal K9 takes issue with this because "guarantees are a moot point if the dog is donated. It makes sense if you're spending $15000, to $20,000 on a dog that you want health guarantees. But if you're getting the dog for free, what does it matter?  We have millions of dogs being euthanized each year, and a lot of them can do this work.  If there's a problem with a dog, we can replace that dog very quickly."  In other words, the dogs supplied by Universal K9 are disposable.

What can't be replaced is public trust and the Toledo police are apparently unwilling to risk their reputation on stray pit bulls.  For those who are concerned with the numbers of dogs euthanized each year, educate pit bull owners on the value of neuter and spay.

For a bit more information on fully trained police dogs please click here. The Mansfield police department just graduated two new police dogs after 9 full weeks of full time training with their new handlers.  These dogs are also from the Wapakoneta supplier and have been bred for the task, chosen from the best prospects in Europe, likely received training in Europe and were imported for American police departments.

Police departments that can afford bred-for-task dogs are not rushing to the AFF for pound pit bulls.

Finishing up in Toledo, the Lucas County Pit Crew's foster homes are full of pit bull puppies.  Of the 69 pit bulls harbored by the Pit Crew on the date the article appeared in the Toledo Blade, 57 of them are under 65 months of age. Per the Blade "Ms . (Jean) Keating said many of the litters were the result of accidental breeding and surrendered directly to the Pit Crew."  Neuter and spay education falls upon deaf ears with pit bull owners.  These puppies are a financial drain on the Pit Crew's finances.  The Pit Crew purchased a property this year to serve as a permanent home for the organization and renovations are expensive.

This is an insane story that has been waiting too long.  A pit bull named Brownie, adopted out of the Trumbull County shelter in November on 2015 was returned to the shelter in April of 2016 for euthanasia. Brownie had attacked two smaller animals.  No further details on those attacks were offered.  A staff member injected the euthanasia solution into the muscle rather than a vein. Human error?  Wrong drug and wrong route?  Who can say, humans make mistakes.  In any case, instead of quickly administering the drug via vein, the dog was transported to a veterinarian for resuscitation. WHAT?  Brownie lived but animal advocates attended a Trumbull County Commissioner's meeting to complain.  They made the point that the medication administered was painful when injected into the muscle.

The central issue was completely missed by this very small group of advocates.  Brownie was there for the purpose of euthanasia because he attacked other animals.  Brownie was dangerous. The pain of the animals Brownie attacked was never considered.

Let's consider the pain experienced by animal victims of violent dog attacks.  Here are a few photos of animal victims of pit bull attacks.  Think these wounds were achieved without pain?  These are far from the worst photos available to me.  I believe most of the dogs did survive except for the pit bull with the gunshot wound to the top of his head, shot for killing the cats, and the very last dog.  Victims suffer pain, lots of it.

Brownie lived, God only knows where he went from here. I hope the advocates protesting Brownie's pain will consider the pain of his future victims.  No dog should be subjected to pain but sometimes   mistakes are made. 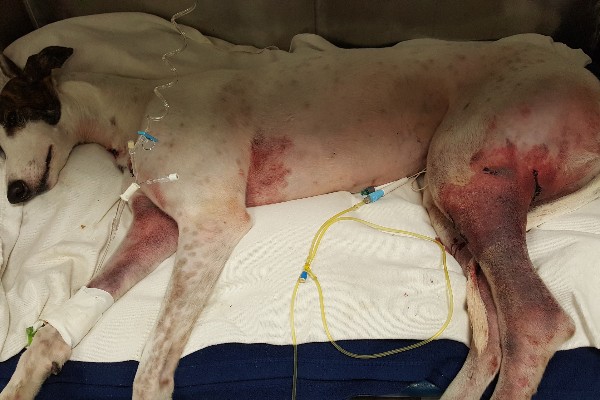 This little Boston Terrier did not survive.  Think there might have been pain here?

Brownie had the Golden Ticket.  He was adopted out of a county shelter but he failed his real world temperament test.  He created his own misfortune by attacking small pets.  He was on the euthanasia table for good reason. That  reason was the protection of peaceful pets like the ones seen here.

Posted by scorched earth at 3:32 PM