Here are examples of journalism without thought.  We begin and end this post with on same topic, reporters who don't think before the present a story.

WHIO writes about the glut of pit bulls in shelters as the result of overbreeding.  So far, we are on the same page.  Pit bull advocates admit that yes, pit bulls are overbred.  So far we are on the same page. However, history tells us that pit bull owners have no interest in neuter and spay, even when the surgery is free.  Any community can apply for grants for the purpose of neuter and spay for pit bulls only, breed specific, those with Chihuahuas or Labs are out of luck.  These grants fail to make any difference because pit bull owners breed pit bull puppies as a tax-free income source.  As an example, Several years ago Kansas City got a $100,000 grant for breed specific neuter and spay and a year later returned almost $87,000 because they could not find pit bull owners with any interest in neuter and spay.

The  Pit bull advocates interviewed by WHIO admit that pit bull owners need to be more responsible.  Again, we are on the same page.  The cure, per WHIO is "Heather Concannon, the Humane Agent for Montgomery County... says the public needs to change their perceptions of pit bulls to show people raising one responsibly takes work."  Yes, it does but pit bull advocacy fails miserably here.

Pit bull advocates and pit bull owners are the only ones capable of changing the public perception of pit bulls.  Stop breeding dogs destined to suffer and die because no one wants to bring a dangerous animal into their home. Pit bull advocates and owners need to figure out how to confine their dogs in order to protect the safety of the neighbors and their pets.  Pit bull advocates and owners need to carry insurance to cover the medical expenses of potential victims.  If pit bulls were responsibly confined to the property of the owner, not bred in wildly unsustainable numbers, and the public was assured that bankruptcy for the victim was not the natural result of a thoughtless mistake by the pit bull owner then there would be no public interest in regulating pit bulls.

Pit bull advocacy needs to clean up its own mess.

Two pit bull dog bites were reported in Brookpark.  On August 9th a Lockhaven Ave resident reported that a neighbor's pit bull pushed its owner out of the way and escaped from the house.  The victim was bitten on the arm.  The victim was treated at Southwest General Hospital.  The attack was referred to Animal Control.

On August 11th a woman walking her dog on Sylvia Ave.  She and her dog walked past a pit bull, also being walked.  The victim was bitten on the leg.  The case was referred to Brookpark Animal Control.

A North Olmsted couple was out walking their 22 pound Cocker Spaniel mix when a pit bull broke away from its handler, a SEVEN-YEAR-OLD GIRL   The pit attacked and killed the small dog.  The adult owner of the pit bull stated that the child was only holding the leash until he could come outside to walk his dog and that the pit bull "had never done anything like this before."  The pit bull owner stated that he was new in the community and was unaware that North Olmsted regulates pit bulls.  How many times do we hear this excuse?

More information was included in an article in the West Life, a neighborhood newspaper, but this is behind a paywall.  I have a copy of the article sent to me by a reader.  West Life Reporter Jeff Gallatin states that the Cocker Spaniel mix's name was Angel and she was 13 years old.  She was owned and walked by her owner, David Ostroske, a Cleveland State University police officer, and his wife Doreen.  Angel was adopted from a shelter six years ago.

The pit bull, Jax, weighed 80 pounds and was adopted from a shelter five years ago by Michael Cowan, a Marine recruiter, and his family while he was stationed in North Carolina.    The Cowans moved to North Olmsted in April.  Per the West Life "The Cowans didn't know about North Olmsted's requirements for pit bulls."   Pit bulls are banned from military housing.  How could Cowan be completely unaware that his dog might be regulated in North Olmsted?

Jax the pit bull was euthanized.  Brooke Cowan told the reporter "We're not getting another pit bull, not after something like this." "It was terrible.  We feel terrible for what happened to that dog and its family."

David and Doreen Ostroske are grieving for Angel and have no immediate plans to get another dog.
Doreen Ostroske told the reporter "We know that the dog's owner's didn't mean for this to happen, but people have to be aware of the high risks and responsibilities of owning a pit bull.  I honestly don't understand why someone would own one in a family neighborhood."  We share her thoughts and are sorry for her loss.

A Cleveland man, Robert Cook has been indicted for dogfighting.  Thirteen dogs were "rescued" from Cook's property.  We fully expect to find these bred for bloodsport, pit trained and tested pit bulls now housed at the City of Cleveland Kennels will be offered for adoption to the public through the City Dogs program.   As of 8/27/2018, the City of Cleveland has 92 dogs available for placement, of the 92, only 12 are not pit bulls.

Watch the video on the news link.  Classy.

A Sandusky woman, working in her yard was forced to stab a neighbor's pit bull after it entered her yard'  "  “My neighbor’s dog got loose out of her yard. It attacked my two dogs and it attacked me!” screamed Julia Parsley into the phone on Sunday evening.

It happened in the backyard of Parsley's Sandusky home.
“The dog that got out and attacked my dogs came between these, went through there, and came out right there,” Parsley said as she pointed to a wobbly fence separating her yard from her neighbor’s."
The neighbor pit bull entered her yard menacing Parsley's pit bulls then attacked her.  She stabbed it to death.  She received hospital treatment for her injuries and has a serious infection. Charges are pending against the owner of the attacking/dead pit bull.

8/17/2018
Twinsburg Ohio
Summit County
A woman and her dog were attacked by a pit bull in a local dog park.  Twinsburg police are looking for the dog, named Daisy, described as a pit bull weighing 40 to 60 pounds.  Anyone with knowledge of the owner please call Twinsburg police officer Caporuscio at 330-425-1234.

Two adults suffered what were called "significant" injuries while protecting children from a pit bull attack.  The attack was described as an "hour long rampage" by News Chanel 5.  Becky Barker and Jay Anderson responded to the screams of the children who were trapped on top of a car by the three pit bulls.  Barker was attacked immediately as she left her house to help the children.  "Barker told News 5 the pit bulls had children trapped on top of a car that was parked in front of her home, and when she stepped out to help, the pit bulls bit her multiple times in three areas of her body.

"They could have killed me, they really could have, if they would kept ripping me open like they did," Barker said.
Jay Anderson also responded. He had a screwdriver in his hand that he attempted to use as a weapon. One of the pit bulls took the screwdriver. Mr. Anderson was bitten on his legs and his back.

EMS, the fire department and the Cleveland Dog Warden responded to the call. The dog warden seized one of the pit bulls but allowed the owner to keep two of them.  Why? 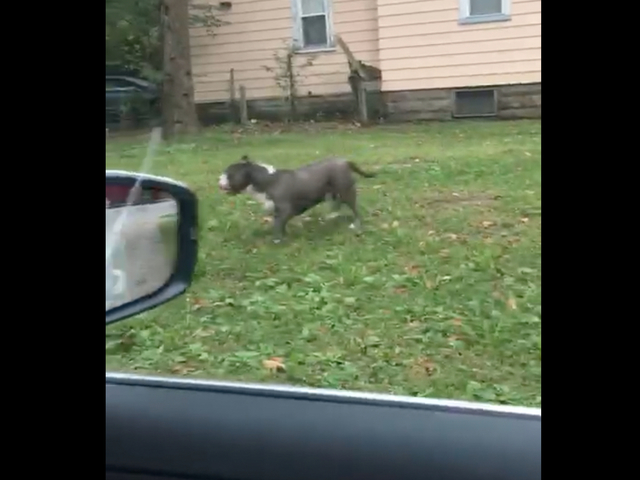 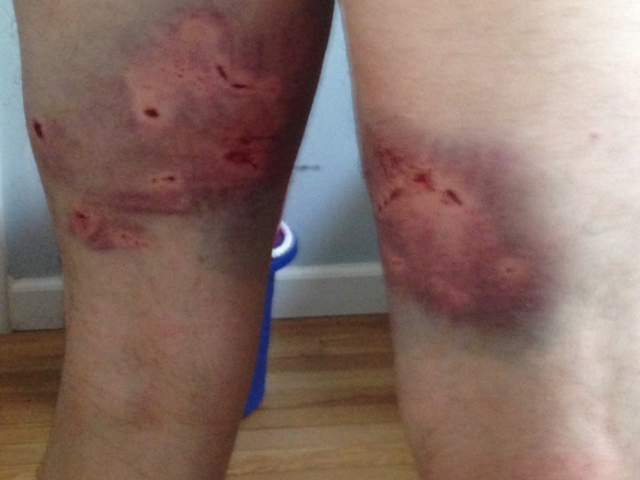 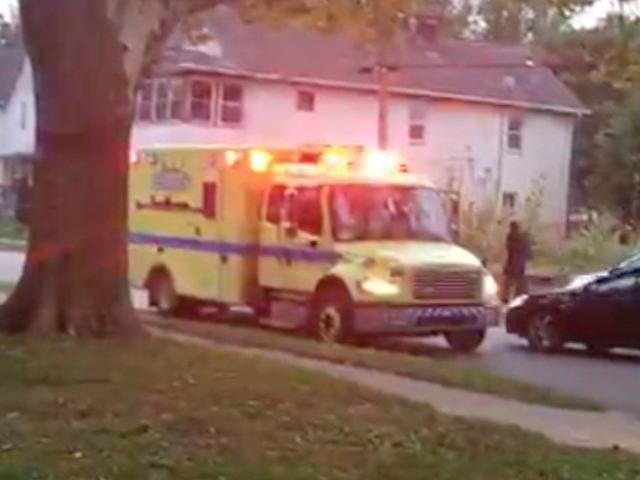 Given that EMS, the fire department and the dog warden were called to this dumpster fire, how much did this cost the city of Cleveland taxpayers?

Late update - Video has been posted of the rampage by these two pit bulls. PLEASE take a moment to watch it.   How will the breed advocates pressuring Parma City Council to drop that city's breed ban explain this?

A Cleveland woman lost her beloved pet, Tyson, a tiny Lhasa Apso in front of her horrified eyes, in front of her own home.  Laura Lehmann was with her dog at the time of the attack, caught on film. The pit bull is still in the home across the street.  It has been ordered out of the city but the owner has 30 days to comply.  Where will this pit bull go?  It will most likely be relocated to another city where the history is unknown.  Will a change of address change the actual dog?  Nope, just spreading the misery around.   Is this the best we can do? 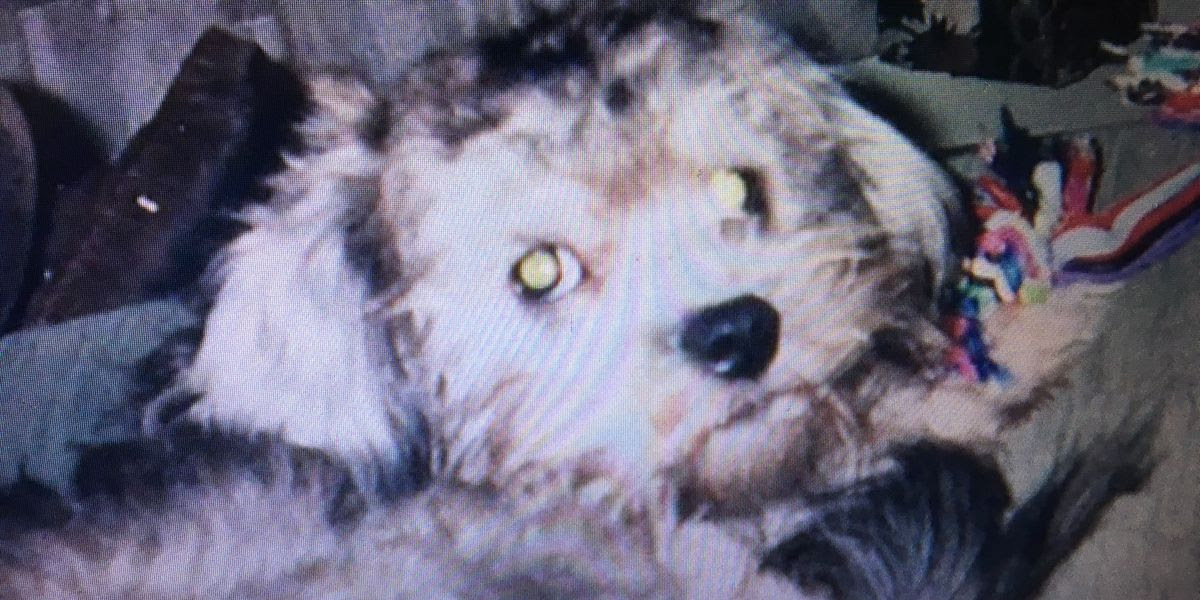 The usual excuses have been made, the owner should be held responsible, not the breed. The prosecutor is "looking into " this situation.  Channel 19 has a reporter who owns a pit bull and has chosen to challenge a pediatrician's statements that pit bulls pose an unreasonable danger in our communities. We will see this very reporter in the next entry.

A Cleveland woman's dogs have been attacked, in her own fenced yard,  THREE times by a pit bull owned by a woman living two streets away.  The first attack, on Bear, occurred on September 23rd.  The owner of the pit bull apologized and promised to pay the vet bills.  Bet she didn't.  Five days later the same pit bull came back and attacked Missy, the home owner's other dog.  As soon as Missy returned home from the vet she was attacked again.  Missy was still in a cone and was defenseless. Brenda Nichols, the owner of Bear and Missy is afraid to leave her home.

News station WOIO is "talking to the city" about why it took three attacks by the same pit bull to get the dog picked up.  The reporter, Victor Williams does fall back on the talking point that "the owner is responsible" even though the owner is obviously NOT responsible.  Reporter Williams appears to be rightly distressed by the attacks he is reporting on but in this case, he does not reveal his advocacy for the breed.  Reporter and pit bull owner Williams contacted a pediatrician who is outspoken about the dangers of pit bulls to the peaceful public and especially to children.  Williams requested a dialog with Dr. Marusinec and got it.  Dr. Marusinec states in  Williams report "“The medical studies in the last 10 years really overwhelmingly conclude that pit bulls are especially dangerous to children,” said Pediatrician, Laura Marusinec." Marusinec by way of facetime says they’re just too much of a risk.