Newark update - Or a man in a three piece suit, silk tie, two tone wing tips, and a fedora has an "offer you can't refuse."


I was sure that I was done talking about Newark's pit bull advocates but new developments bring me right back here.

When we left Steffen Baldwin, of Marysville Ohio he was negotiating with Best Friends Animal Society of Kanab Utah, looking for hints from a Best Friends lawyer living Massachusetts on how to change law in Newark Ohio.  You may wonder why individuals and organizations with such divergent addresses might trouble themselves about a lawful and thoughtful decision by elected Newark City Council members.  Good question.  Newark Ohio has a population of 47,573 per the last census making it the 20th largest city in the state of Ohio. This is not a huge metropolis, why the hysteria surrounding Newark Ohio?  Mr. Baldwin, as we saw in the last post, has also lobbied in St Marys Ohio (population 8332) after the St Marys City Council voted for a breed ban. Why the hysteria over small towns in Ohio?   Here is my suspicion, dealing with pit bull advocacy is very much like dealing with organized crime. Saying "no" is simply unacceptable.  The man in the three piece suit and fedora turns up with the "offer you can't refuse."  Best Friends is unable to let it go and has posted this Action Alert.  Best Friends wants pit bull advocates from all over the world to send messages of complaint to the Newark City Council.  "Now it's time to let our voices be heard and to send a clear message to these council members that discrimination is wrong for Newark, and it's wrong for Ohio."
Best Friends has made it easy, the system is fully automated for ease in attempted intimidation .

Here are some interesting facts.  In addition to Newark Ohio, Wauseon Ohio and St Marys Ohio have said no to pit bull advocates this year. Reynoldsburg Ohio, Bexley Ohio and Parma Ohio said no in 2014. Cincinnati pit bull advocates crossed state lines in 2014 to bully Ft. Thomas Kentucky.  Ft. Thomas said no to them.   So far in 2015 Best Friends has pushed anti BSL bills in Arizona, Washington State (foreshadowing here with Washington State), Montana, Kentucky and Georgia and lost in every one of these states.  State lawmakers are hearing from their actual constituents concerned about loss of home rule rights.  Despite the brags from professional pit bull advocates their recent legal record is poor.

The phenomenon of out-of-state interference in local control of dangerous dogs is not limited to Ohio.  A recent article from the Idaho Press-Tribune tells us that a pit bullcentric lawyer from Washington state has written warning letters to Fruitland Idaho (population 4684), Payette Idaho (population 7433), and Payette County Idaho (population 22,836).  Per the Press-Tribune " Friday’s letters from the Animal Law Offices of Adam P. Karp request the municipalities change their definition of a “dangerous” dog as well as their definition of the dog’s breed. The letters claim the laws do not accurately define the “visual identification” of the dog’s breed, which could lead to unlawful detaining. Further claims say they are “targeting dogs based on speculation and scientifically-indefensible grounds” and the municipality “fails to accommodate those who assist disabled citizens as service animals under the Americans with Disabilities Act.  Karp said in an email Saturday the letters were not official tort claims. “No notices of claim have been (or need be) filed in this instance,” he wrote. “Rather, the letters provide each municipality an opportunity to make a much belated, and vital course correction before suit is filed. The (letter) correspondence serves as a courtesy warning.”
Well how courteous of Mr. Karp to warn these small towns that from his office in Washington State he demands changes to laws in Idaho.  I find his arrogance absolutely stunning.  Surely Mr. Karp is aware that courts do not find BSL unconstitutional.

Here is another example of lawyer interference in local law, in this case the lawyer does have an office in the community.   Aurora Colorado has a breed ban and is very satisfied with how well it is working.  Pit bull advocates have challenged the ordinance so many times the city council got fed up and put it on the ballot.  Aurora voters supported their breed ban by better than a two to one margin. Done deal, the voters have been heard right?  Nope. Can pit bull advocacy admit defeat and move on?  Of course not. Lawyer Juliet Piccone wants the state legislature to step in and change law for her.  Please note that the Colorado courts (above) have ruled in favor of communities with breed bans.

Juliet Piccone with client Zona, a pit bull mix implicated in an attack upon a small dog, with a history of running at large, and hints of previous "incidents."  You can get Ms. Piccone's version of how Zona got in trouble with the law by clicking here.   Ms. Piccone raises funds relentlessly for her "pro bono work."   I'm not even going to get into that.

I find the arrogance of pit bull advocates in general stunning.  Local law is local business.

But yet again, I digress.  Back to Mr. Baldwin.  In a thread on his personal Facebook page he posts on a recent incident in Lakewood Ohio and he again calls on the Best Friends lawyer Lee Greenwood residing in Mattapan Massachusetts and the Huffington Post Animal Welfare Editor Arin Greenwood living in Gulfport Florida for assistance. 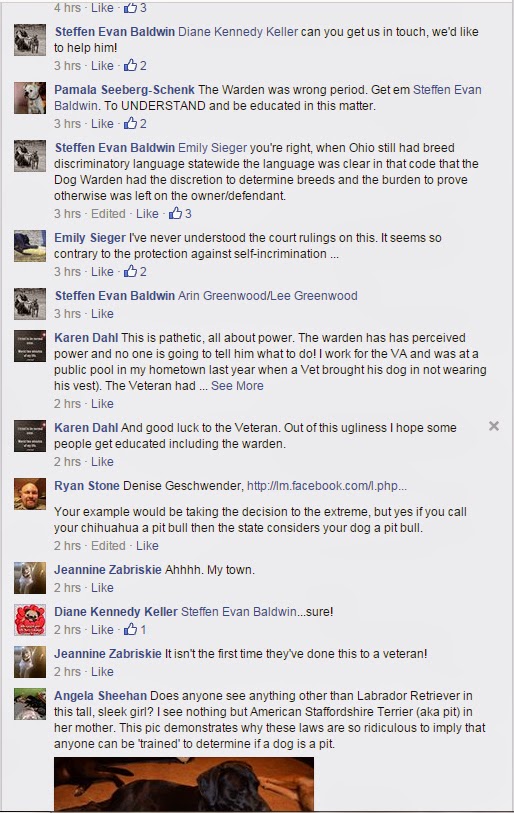 Please google the Huffington Post articles and blogs about pit bulls.  A pit bull puff piece is published after every fatal pit bull attack and after pit bull attacks making national news. Over-the-top does not begin to cover it, the Huffington Post has a whole separate division for pit bull news but not for Pugs or Poodles, or Beagles.  I wonder why?  Possibly because no other breed requires this insane level of advocacy, but back to the central point.  Local business is local and pot stirring by professional pit bull advocates should be considered attempts at intimidation of local officials.

Mr. Baldwin proudly announces on 4/9/2015 that he has made the big time.  He not only confers with Best Friends(motto - Bullying City Councils and State Legislatures in Order to Deny Home Rule Rights for Self Determination and Public Safety Everywhere) lawyers and Huffington Post editors he has been accepted as an intern at the Animal Farm Foundation (mission statement - Securing equal treatment and opportunity for "pit bull" dogs) but there is no concern for the victims of pit bull dogs, both human and animal.  Steffen has won the trifecta. 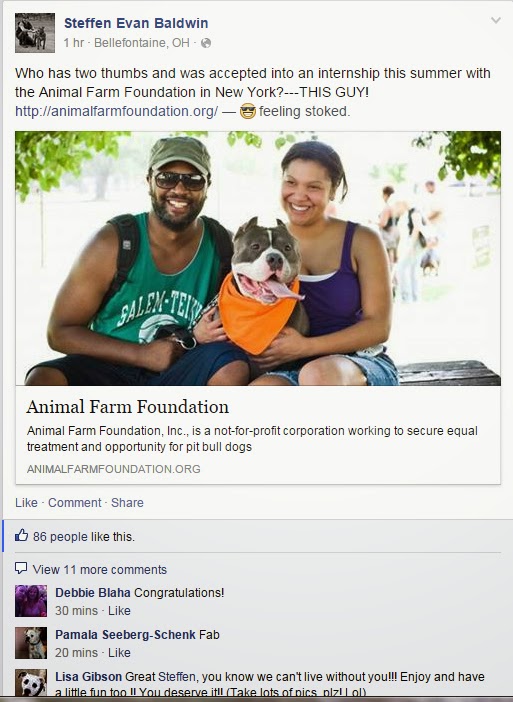 Please page through to the section covering gifts and contributions made by the AFF.  Lots of entries for neuter and spay surgeries. This is a very good thing and I support it fully.  You will also see multiple entries for AKC CGC testing, the AFF pays $150 PER DOG for pit bulls passing the test. You will also see payments made to shelters for placement of pit bulls. Nothing for Beagles though.

Here is an interesting section from the AFF website Best Practices Adoption Policies and Procedures.  Keep in mind that pit bulls kill more Americans than all other breeds combined by a long shot.  The AFF feels that it is wrong to require experience with the breed, or a fenced yard, or adult adopters, or home ownership.  Insurance? Never mentioned.  Got children, other pets?  Should not be a consideration.  Background checks?  Mandatory training classes?  Good heavens, no.

Do not miss the Policy and Procedure section's glowing review on Longmont Humane Society. Longmont partners with the AFF, we discussed this particular shelter in our last post.  Here is a quote from the AFF Best Practices material "Sarah (Clusman, Training and Behavior Coordinator for Longmont) explains that the staff and volunteers are well aware of breed discrimination, and they hope to educate the public that dogs should not be judged by their breed, but rather by their individual personality."   Here is what happens in the real world, in 2012 16% of dog bites in Longmont were from dogs adopted out of the Longmont Humane Society. 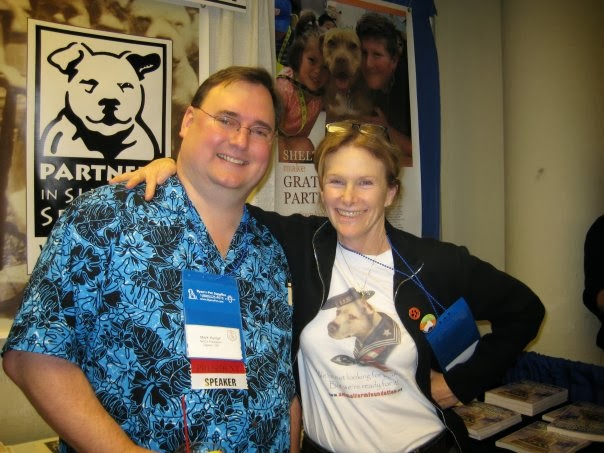 Mr. Kumpf was all in for changes to Ohio law written by Best Friends but under the new law Ohio saw nine fatal dog attacks by dogs of several breeds in just the first two years.  Montgomery County, Mr. Kumpf's district, had TWO fatal dog attacks within six months.  At this point I should restate the connections between the Animal Farm Foundation and Best Friends Animal Society.

Best Friends Animal Society is outrageously committed to pit bull advocacy.  Best Friends employs Ledy Vankavage Esq to head their legal department.  Ms. Vankavage is a lifelong pit bull owner and registered lobbyist.  She has her fingers in every state.  Just google the Best Friends Pit Bull Initiatives or anything pit bull related on the Best Friends website.  This is too well documented to even bother with linking anything.  Ms. Vankavage is a close associate of Jane Berkey and serves on the board of directors of the Animal Farm Foundation (see tax records linked above).  Ms. Berkey supports Best Friends efforts to push laws that benefit pit bulls,  Berkey pays for faux Tobacco Institute style "research" proving the safety of pit bulls through the National Canine Research Council, a subsidiary of the Animal Farm Foundation (both owned by Jane Berkey), which is then given to Best Friends for use in campaigns to change law.  This incestuous and circular connection keeps the money moving and the pit bull propaganda machine humming.

Show of hands, does anyone still doubt the connection between smoking and cancer?  The federal government finally saw through the tobacco industry lies and regulated the stuff.  The same has come to pass with chemical industry trade groups.  Possibly the tide will turn against professional pit bull advocacy as well. 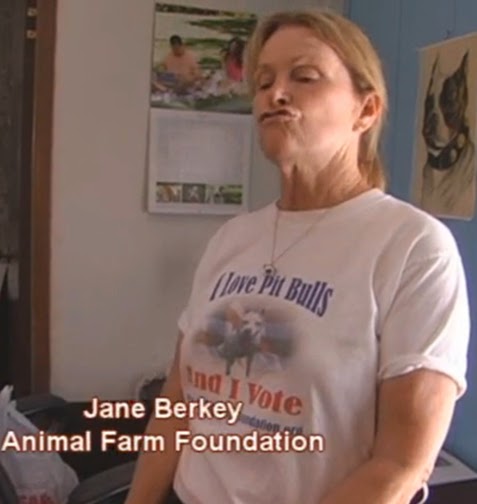 You are in good hands Steffen.

One last update.  Remember the four year old child attacked by a pit bull recently adopted by the family?  We talked about this in the last post. The boy is off the vent and back home.  Per The Olympian "On April 1, Gavin was mauled by Smash, the family’s newly adopted pit bull, while they were in the backyard. The boy has several broken bones, including his jaw, cheekbone and the bridge of his nose. He underwent two surgeries at Harborview Medical Center in Seattle before he was able to come home.

“They had to take a piece of his rib and fix his eye sockets,” said his mom, Alissa Evans, 29. “But you can’t tell. The plastic surgeons up there are miracle workers.”

Gavin's mother has covered the mirrors in her apartment with towels so Gavin can't see the damage to his face.  In addition to the eye socket injuries, broken jaws, and broken nose, Gavin lost five baby teeth and four permanent tooth buds.  He has only two teeth on top now, he can eat only soft foods until his permanent teeth come in. This will be a long process.  Gavin will require extensive dental work in the future, likely implants.   For breed advocates who might like to make a contribution, there is a gofundme page.   Somebody please ask Jane Berkey for a donation.

Gavin's mother has made it abundantly clear that the dog is a "blue nose pit."