Dayton Ohio
9/12/2013
A postal worker was mauled by a pit bull in Dayton Ohio. Dayton resident Joe Brewer may have saved the life of mail carrier Richard Oberlin, 45 years old, an employee of the United States Postal Service since 1998.  The pit bull burst through a screen door to attack Oberlin. Per WDTN.com   Joe Brewer told a reporter "I come running out here and the dog had him down on the ground and I started yelling at the dog and he backed off immediately."

Dayton Police Sgt. Moises Perez told reporters "It's a possibility we could be investigating a death because this dog was just relentless in his attack. He stood over this gentleman. He was basically helpless,"

The mail carrier's pepper spray can was found on the grass.  Per Police Sgt Perez, mail carrier Richard Oberlin tried to use it but it had no effect on the pit bull. 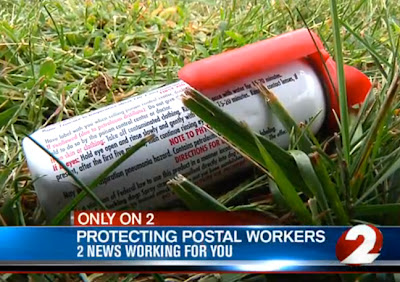 The mail carrier's blood spattered bag was found where he dropped it while using it as a shield as postal workers are trained to do. 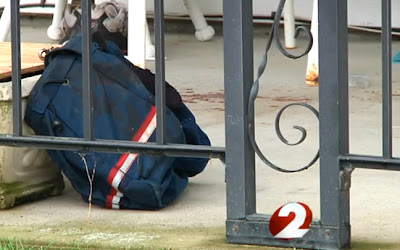 Mail was scattered across the lawn. 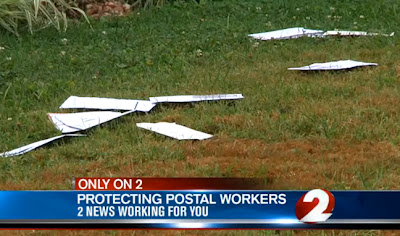 Animal Control took the dog away but it took two AC officers plus a friend of the pit bull owner's family to subdue the pit bull.  The dog will be quarantined for 10 days at Montgomery County Dog Warden Mark Kumpf's shelter, the Animal Resource Center.  Please note the physical condition of this pit bull, it appears that she is a breeding female, an income generator.  Roughly a million pit bulls are euthanized in American shelters every year.  Responsible dog owners do not breed pit bulls. 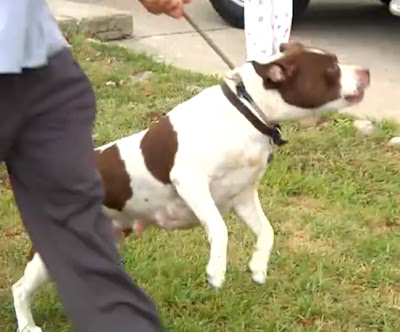 The mail carrier was transported to Miami Valley Hospital where he was listed in good condition on Friday.

The home owner is a woman in poor health, she was was caring for the pit bull for the actual owner, her son, while he was out of town.  There is no record of vaccination and the pit bull is not licensed.

David VanAllen, a Postal Service spokesman stated that there have been twelve dog attacks upon mail carriers in Dayton Ohio, located in Montgomery County, since last October.  HB 14, the bill that removed requirements for insurance and containment of pit bulls in Ohio was fully and vocally supported by Montgomery County Dog Warden Mark Kumpf.  This bill was promoted as "finally giving dog wardens the tools to deal with vicious dogs.  It appears that those tools have not been used in Dayton.  Will Mark Kumpf use those tools NOW?

For the fiscal year 2012 Dayton Ohio and Cleveland Ohio were tied for 10th place nationally for dog attacks on Postal Workers with 26 attacks each per this press release from the USPS.  Breeds for the Dayton attacks  are not listed but PostalMag.com, an online publication for postal workers lists the dogs most likely to bite. The list was taken from the CDC.  Pit bulls top the list, no surprise. It is notable that Dayton did not even make the top dog attack city ranking in 2011, the last year that pit bulls were regulated in the state of Ohio.

Here are just a few recent attacks on mail carriers across the United States.

Flint Michigan had two pit bull attacks on mail carriers within just a few weeks this summer.  For more information click here.   Please note that the June attack happened as the mail carrier was delivering a package and the pit bull jumped out a window to attack him. Genesee County Commissioners have announced that they intend to work with postal officials to reduce the number of dog attacks.

A Saint Louis County MO mail carrier with 25 years service required 36 stitches after she was attacked by a pit bull in April.  For more information click here.  The story on this attack continues here.  Pit bull owner Barbrial Jones has two pit bulls, a breeding pair.  She stated "this is the first time the three year-old pit bull has ever attacked". Jones insists  that " both dogs are usually friendly and supervised." Gesturing to the female, Baby, she says "You can take off her leash, she still listens.”

Per news reports the pit bulls got out through a hole in the fence (a pit bull breeding operation with a hole in the fence.  Tell me when this is beginning to make sense because I must be missing something here).  Once Ms. Jones pit bulls were at large they were too strong for her to contain them. “They can be aggressive,” Jones admits, “they’re naturally born like that.”  Jones apologized to letter carrier Gwen Moore for her injuries and asked for Moore's forgiveness.  Jones then tried to get Fifty, her male pit bull back from animal control but was told that after quarantine Fifty will be neutered to reduce aggression. Jones and her fiance breed pit bulls as a side business and they "hope to get around" the requirement for neutering her mauler.  The apology looks more like manipulation in order to protect her side income. Pretty much "Hey, since the attack hit the news I better say I'm sorry, but this is business here.  Fifty needs to make lots of little Fifties (remember the statement "they can be aggressive, they're naturally born like that").  Just what Saint Louis County needs, more game bred pits.
In Pittsburgh PA a fifteen year postal service veteran was attacked by two pit bulls. The USPS stopped delivery of mail on the street where the attack occurred for at least 10 days.  For more information click here.
In San Diego CA a mail carrier was attacked by a pit bull.  The pit bull broke through a chain link fence and attacked both the throat and the leg of Buddy Siso.  Mr. Siso required plastic surgery on the injuries to his throat.  He hopes to return to the postal service after his recovery but may not be able to work as a mail carrier in the future.  For more information click here.

Mail carrier Buddy Siso.
Siso stated " “At night, when I’m going to sleep, I can see the eyes of the dog.” Per U-T San Diego "Besides the bites, the attack left Siso with a missing front tooth and several other teeth cracked or loose, an injured shoulder, a fat lip, and a long scratch across his face. He had plastic surgery and still has a long way to go before he has recovered physically and mentally."

A Chula Vista CA pit bull owner is unhappy that her pit bull was sprayed with mace by a postal worker. Per RTV6 "Viviana Alcazar called the incident animal cruelty and believes the postal worker was never in danger. Alcazar's fence sits next to mailboxes and when her dog Sampson is out, he barks when someone is outside of the fence. Alcazar said Sampson, a 74-pound pit bull, is a well-trained sweetheart. However, she said Sampson apparently barked at the wrong person Thursday morning."
RTV 6 goes on to say "In July, a mail carrier's neck was ripped open by a pit bull that bounded out of an unlocked gate. In the last three years, two other postal workers died as a result of dog attacks.The attacks have made many mail carriers nervous around big dogs and forced some to carry pepper spray." Sampson the pit bull required some eye drops but has recovered completely. Alcazar states that she will keep Sampson in the house when mail is being delivered. Well, that is a simple solution to the problem, just keep your mauler in the house.

Per About.com U.S Government Info "The U.S. Postal Service reported nearly 5,700 dog attacks on letter carriers across 1,400 cities in 2010, costing the agency almost $1.2 million in medical expenses" in 2010. The $1.2 million does not include lost time and productivity.

Pit bull attacks are expensive and we are all paying the costs.