9/5/2013  A Zanesville police officer was attacked by a pit bull while he was investigating a breaking and entering report.  The officer chased 44 year old suspect Jason Williams to the front door of a house.  There was a struggle on the front porch, Williams entered the house and ran up the stairs.  Williams was heard to order his pit bull to attack the officer "sic him, Fathead."  Fathead the pit bull bit officer Scott Comstock on the arms several times and was shot in self defense by the police officer.  Fathead bull was removed from the premises by the dog warden, euthanization and rabies testing were expected.  Per the Zanesville Times Recorder "   Muskingum County Prosecutor Mike Haddox said a complaint was filed on Williams for breaking and entering, a fifth-degree felony; theft, a first-degree misdemeanor; possession of criminal tools, a fifth-degree felony; tampering with coin machines, a fifth-degree felony; aggravated robbery, a first-degree felony; and felonious assault on a police officer, a first degree felony. Williams faces a maximum of 25 years in prison for his involvement. Haddox said the maximum amount of time Williams would have faced if he had cooperated with the officer was three years." As is is frequently the case, the pit bull owner made more than a few tactical errors  " As officers searched for him upstairs, the suspect reportedly fell through the ceiling but was not injured, according to police. "

Zanesville police Captain Tony Coury stated to a whiznews.com reporter "I think you always expect something like that might happen and we see dogs and the officers encounter multiple dogs, but the pit bull is the one we fear the most because it can do the most damage."

The dog was euthanized by the Muskingum County Dog Warden.  Officer Comstock could return to work in a week.

Animal Resource officers (Montgomery County dog warden Mark Kumpf's staff) were called to a home in East Dayton to investigate possible abandoned dogs, the dogs could be seen at an attic window and appeared to be pit bulls.  Neighbors stated that they had not seen anyone at the house for several days.  The dog owner arrived and by way of explanation, told animal resource officers that he had recently been released from jail.  Who would have thought?    The man was allowed to keep the dogs.

Columbus police are called to the scene of a pit bull attack upon a couple walking peacefully in their neighborhood.  The pit bulls were shot as they approached police. The victims were taken to Ohio State University Hospital East.

nbc4i.com gives more details.  "Claude Holloway and his wife Deborah say they were walking down the street to the convenience store when they noticed a girl, approximately 11-years-old in a yard struggling with a group of dogs. According to the Holloways, there were a total of six dogs, two of whom were pit bulls.

Deborah Holloway said the pit bulls were attacking a puppy and that the child was trying to stop the attack while the other four dogs stood in the yard. Deborah said she picked up a stick and handed it to the child in an effort to help her. The couple says that is when somehow the fence door got loose and the dogs got out."  Claude Holloway told a  reporter  "He was trying to bite me. And I swung at him. That's when I missed. That's when he bit me. The officer was just coming across the alley when he saw that. He come out of the car shooting. He didn't ask nothing. He just started shooting the dog," Claude Holloway said.
Mr. Holloway was bitten on the hand and Mrs. Holloway was bitten on the knee.  They were released from the hospital Friday evening but  will have follow ups with their doctors.

For video of an interview with the Holloways please click here.

What might the cost of this level of police presence be?  Who do you think will pay for this?  Not the pit bull owner.  Taxpayers in the city of Columbus will pay the bills here.  Who will pay the medical bills for Mr. and Mrs. Holloway?  Don't bet your paycheck that the dog owner will pay it. 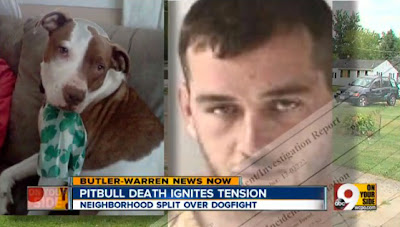 Fox19 reports that a West Chester man shot and killed Harley, a pit bull belonging to a neighbor after the person walking the dog was unable to control it.  As the story goes, Shane Bishop was walking a pit bull (presumably on the sidewalk) using a retractable leash (always a bad idea) and lost control.  Monty Hagenschneider was in back yard of his home and had his eleven year old Beagle named Scout with him. 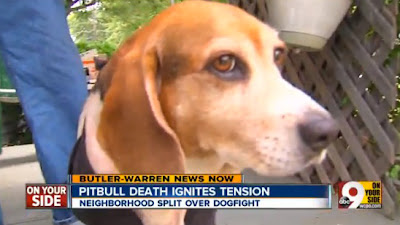 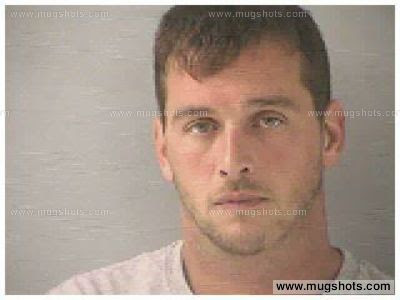 For a better look at how pit bull violence impacts a neighborhood please click here for a video of  the interview with the Beagle owner, a look at the injuries to Scout, and also comments by a neighborhood pit bull supporter. 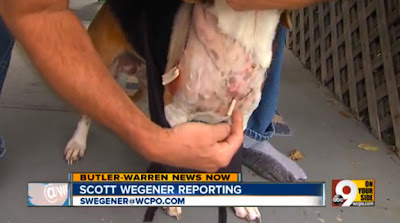 There never appears to be a shortage of folks willing to stand in front of a camera and deny documented fact. In a mind numbing advocacy statement Barb Bryant, who was not present during the attack on Scout,   tells a reporter " Harley was not like that and the police reports can't be true."  She goes on to describe the neighborhood brawl that broke out when Bishop came back to threaten Hagenschneider. Mr. Hagenschneider is afraid for his life. 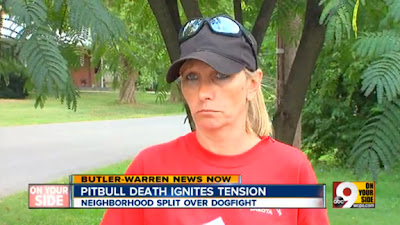 Pit bull advocacy loves rhyming slogans and trots out "punish the deed not the breed." Harley's deed was quickly punished and a man fears for his life because of it.  There is something very wrong here.

Note to the staff writer who wrote the Fox19 article -  when a pit bull being walked on a sidewalk bursts into the peaceful backyard of a Beagle owner to maul an eleven year old pet, this is not a "dogfight" it is a pit bull attack.
Posted by scorched earth at 12:00 PM