This post marks a milestone.  The Scorched Earth blog has well over a quarter of a million page views.  Thanks for reading!  There is no shortage of pit bull news in Ohio and elsewhere so we will begin, again, with an astonishing story out of Detroit that appears to mark the outer limits of insanity.

In an unbelievably illogical and irresponsible move, the city of Detroit has hired failed Montgomery County Dog Warden Mark Kumpf to take over Detroit Animal Control in response to the uproar caused by fatal and very serious pit bull maulings in the city. This choice of Kumpf to head Detroit Animal Control indicates that those responsible for this hiring failed to examine Mr. Kumpf's background and job performance in Montgomery County. One would expect this story to come from The Onion but it is for real.  Wow...

For more information on Kumpf's job performance in Montgomery County just enter his name in the search box at the top left of this page.  You will be here all day.

Here is the Cliff's Notes version of the most recent and most serious charges.
Mr. Kumpf served as Montgomery County Dog Warden from 2006 to 2018 when he was fired.  Montgomery County suffered four fatal dog attacks on Kumpf's watch.  That has to be a record.  During Kumpf's tenure as head of Montgomery County Animal Resource Center, the organization did not focus on enforcing the law and publically so.  Kumpf favored an educational model for his department over enforcing the law.  This was an excuse for absolute sloth.  When tasked with enforcement of law related to vicious dogs the ARC staff put sternly worded post-it notes on the front doors of irresponsible dog owners rather than citations.  Mr. Kumpf claimed that he was under the impression that his staff must actually see the violation prior to enforcing the law.  Anyone who had ever actually read the Ohio Revised Code section on dogs knew this to be false.

PLEASE read the Court of Appeals ruling In Schneider v. Kumpf allowing the family of dog mauling victim Klonda Richey to sue Kumpf directly.  This document is amazing for its clarity.

This photo of the family of the most recent pit bull victim in Detroit, nine-year-old Emma Hernandez tears at the heart.  These good people deserve more than what Detroit residents were given.  We are SO sorry!

There is already a petition to have Kumpf removed from his new position in Detroit.
A public protest is also scheduled.
The Dayton Daily News has picked up the story as well.

You can't make this stuff up.

10/1/2019 Update.
It does not look like things are going well for Mark Kumpf in Detroit.  Protesters are marching.

From Cleveland.com
A veterinarian was bitten on the forearm by a pit bull during an exam at the Green Road Animal Hospital.  The bite was described as causing severe trauma and the veterinarian was transported to a local hospital for treatment.  A 10-day confinement was ordered for the pit bull.  One may assume that confinement will not be at the Green Road Animal Hospital.  Will the injury limit ability of the veterinarian to routine exams and surgeries?

Only one veterinarian is listed at the Green Road Animal Hospital, Kelly Rehmer, she is the owner of the business.  How will the clinic operate during her recovery?  Will Dr. Rehmer be able to find another vet to fill in for her?   The financial impact on staff?

This may be a disaster for the Green Road Animal Hospital.

A Clermont County Deputy Sherrif was delivering a court summons when he was attacked by a pit bull   Per WLWT5 "When the deputy walked onto the porch, a large dog charged him, bit him and held onto his leg, the Sheriff's Office said. The deputy steadied himself on the porch railing to maintain his balance as the dog continued to try to drag him by his leg.

According to the Sheriff's Office, the deputy shot the canine in order to stop the attack. The dog then freed the deputy's leg.
The dog died of a gunshot wound. Clermont County Animal Control personnel arrived at the home and took the dog to a local animal hospital. The dog was later identified as an American pit bull.

The deputy was transported to a local hospital for treatment.  Please note - the dog released the deputy's leg only when it was dead.

A Willoughby couple abandoned their sick and injured pit bull mix, Lucy in near-freezing temperatures.  Lucy was found on December 4th running at large in a wooded area.  Alvaro Torres pleaded guilty to cruelty to companion animals and was sentenced to jail time served plus one-year probation.  Pica Torres pleaded guilty to attempted cruelty to companion animals and was sentenced to one-year probation. In addition, they were ordered to pay a $150 fine, plus $1,390 in restitution to the Lake County Dog Shelter for the care of the dog.  It was also ordered that they are prohibited from owning a companion animal.

Pit bull advocates claim that pit bulls suffer abuse and they are correct.  However, that abuse comes at the hands of their owners, not the peaceful public.  Advocates burning to educate should focus their educational efforts on pit bull owners.  Teach humane treatment of animals.  Teach the benefits of neuter and spay.  Teach responsible confinement in order to protect the safety of the peaceful public.  Teach the responsible practice of carrying insurance to cover the medical bills of victims.  If these concerns were addressed then there would be no need for, and no interest in BSL.

Clean up your own mess. 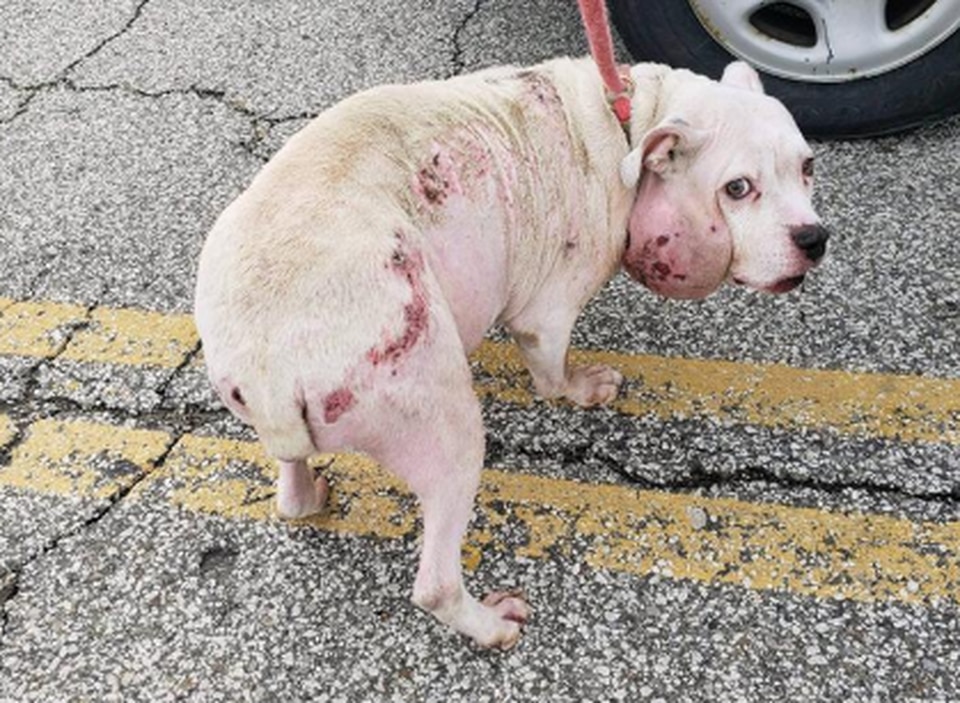 The condition of this animal is a disgrace and the peaceful public is not responsible for it.

We have hundreds more pit attacks to cover but no more time today.